Across the street from where I grew up was a big Catholic church complete with a school, rectory and nunnery.  They hosted robust fiestas, the priests wore floor-length robes, and the nuns were nice to me.  Don’t get me started on the holy water; let’s just say for awhile that year every door in our home had a half-full Dixie cup on its threshhold and an eleven-year-old who crossed herself before going in to the toilet to pee.

I was jealous of my friends who got to go there as I thought the place rocked. My experience with it was only from a distance though, but from my upper bedroom window looking down over the church yard I saw and heard a lot.  But what really got me was the music; Folk Mass was on Sunday nights and the songs were some of the most beautiful things I’d ever heard, igniting my budding musical sensibilities.  This was the beginning of the 70’s… a time of simple words with simple melodies sung with a simple acoustic guitar.  One stanza and chorus of one song said

Yes, they’ll know we are Christians by our love. 1

I never forgot those words.  But the real impact of them didn’t hit me until much later.

I learned that when He was here, Jesus ticked off the religious leaders of the day when He said the commandment that trumped all others was that we should love God with everything we are and next, that we should love our neighbor like we love ourselves2.  Who wouldn’t agree with that?  But although I called myself a “Christian” for a long time, for years I didn’t live up to what that moniker means, in fact, sometimes not even close.  I didn’t love — I lied.  I judged. I compromised. I put myself first and tried to get away with all degrees of ugly.  But I sure looked good when I needed to.

Oh maaaaan, it seems to be there’s a lot of that going around especially on the public stage. Is it just me, or lately does there seem to be a rash of Christians in the news who seem to be tarnishing the label beyond repair?  As I listen to some of Christianity’s more vocal public critics like Bill Maher, Joy Behar and Jimmy Fallon bashing so much of what I hold dear, I want to shout at the TV  “that’s not Jesus!”  And although I cringe at their vitriol, I have to admit something to you:  I kinda don’t blame them.  I mean, come on.  If all they see “Christianity” to be is a TV pastor who once publicly decried homosexuality but then was caught in the back room with a male companion, or believers picketing a California state proposition in anger, or the singer who sang songs about Jesus but then stole another woman’s husband, or a Christian politician’s family member who (whoopsiedaisy) had a child outside of marriage… what are they SUPPOSED to think it’s all about?

Lest I scare some of you, I hope you’ll hear this: I believe we need to stand up for what we believe and strongly defend our faith.  I do. But when we do, do we sometimes forget people are watching as we claim to represent God Almighty?  Are we only ambassadors of His judgment… but not His mercy and love?  What would it look like in today’s political and moral climate if we “put on love”3 in the way He did?

Here’s how I see it.  I can’t speak for how you’ve “lived love” in your life, but I can sure say I’ve done some of those despicable things they’ve done when I knew better.  Many of the hurtful, selfish, idiotic, judgmental things I’ve said or done would cause anyone to question whether I was in fact a real Christian, or certainly whether or not I knew how to love.  As a result, I know I’ve caused a whole lot of people confusion and pain.  Worse, I have very likely done serious spiritual damage in some who might’ve looked to me for what a Christian should be like.  That’s just the awful truth and although I know God’s forgiven me, I have to live with that.

But here’s the sweet part of the deal: today I know God is the “God of the second chance”.  He forgives, He remembers no more, and He moves on, wanting us to do the same so that we don’t waste one more second of the limited time we have on earth wallowing in yesterday’s news.  That’s the beauty of being His kid!  I will always be a bonehead who blows it but hopefully, those “I knew better” moments will be fewer and farther in between and man-oh-man am I grateful He wipes the slate clean each time I recognize it, tell Him so, receive His forgiveness and MOVE ON.  Hopefully I am learning each day to be less concerned with being the perfect Christian and more concerned about what it means to love Him (action) with all that I am and to love others around me (action) as God asked me to do, whether or not they believe the same way I do.  The rest will take care of itself, I know it.  I am convinced today that I am a member of a royal line who is forgiven, loved, and thought the best of by the King.  I want to live like I believe that and will keep on trying to love the way Christ would want me to, all the way until He greets me at the door of heaven.

How will they know we are Christians?  I’d like to think it’s more than what’s emblazoned on our T-shirt, but rather, by the unmistakable way we love.

Read Sylvia’s other posts, and LIKE her on Facebook!
1 ©1966 F.E.L.Church Pub., Ltd. Assigned 1991 to Lorenz Publishing Company, a division of The Lorenz Corporation. Reprinted with permission (8/30/12). 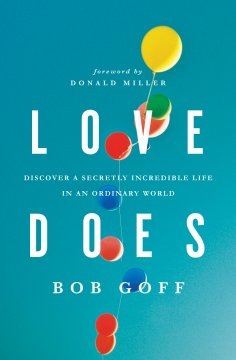 I didn’t expect to be cut in two in the wee hours of the morning one night not long ago, but halved is what I was. As usual lately, I couldn’t sleep and I figured 3am was as good a time as any to start the new book by Bob Goff called Love Does: Discover A Secretly Incredible Life in an Ordinary World.  Bob lives in my neighborhood and I thought I’d be supportive and so I ordered it for my Kindle.  I wanted to read to help me fall back asleep but it had the reverse effect as I remained wide awake until dawn, unable to put it down. As the sun came up, I had finished the whole thing. Every last morsel.  The next morning, I was physically exhausted– but my spirit was energized. 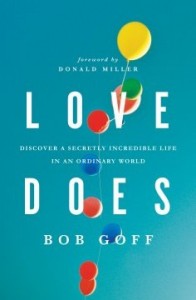 Not many books grab me by the throat. If you really want to know the truth, I’m actually a cynic anymore when it comes to books labeled “Christian” as I think there is sooooo much of the same ol’ same ol’ out there.  So many are nice… but not that many actually knock you off your feet.  Few inspire you to muster up the guts to go and just simply be somebody different.

This book did that for me. Knocked me clean off my high heels.  Bob’s adventurous, no-holds-barred style makes me want to go and be a better person. I am a doer by nature, but Bob has inspired me to get out there and grab life by the throat even more. And isn’t that why we go to the movies, take a walk on the beach, visit a natural wonder… or read a book anyway? We want to come out on the other end answering the question “why should I spend precious time on THIS?”… and have it answered with “because it’ll change how you think”. This book has done that for me and has kicked me in the backside to get up and go DO that thing I say I FEEL.  Love Does.

Order Love Does on Amazon.