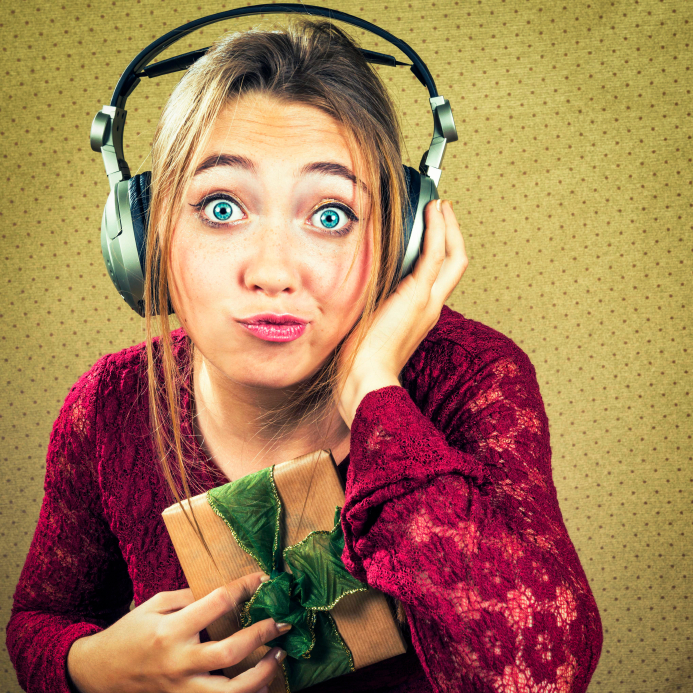 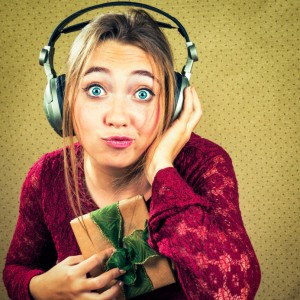 Every year, right after Thanksgiving, we hoist down the Christmas box out of the attic, and before locating the Santa Baby doll that was bought the year I was born, before unwrapping the delicate blown glass ornament my mother gave us when we were married, even before locating the fragile and precious paper ornament Mariah made when she was 5… I find the red leather portfolio that holds the Christmas music.

As I load the CD player with my love worn favorites, it doesn’t take but a second for the memories of Christmases gone by to wash over me.  Even though the Southern California sun may be burning brightly,  I am immediately transported to visions of a white Christmas as in my mind I slide down the hill in the snow on my red disk sled at Grandma’s mountain cabin. 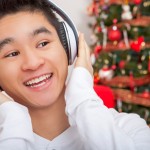 Music does that.  It has magic qualities more powerful than any drug.  In fact, it can be one of the most effective therapies to completely change your frame of mind.  Just try to fight it.

If you’re happy, feel yourself slide into unbridled mirth after listening to Leonard Patton’s “Grandma Got Run Over By A Reindeer” (don’t miss it… it’ll make your day).   Experience the wonder of God’s gift to the world as you listen to Billye’s killer version of “Mary Did You Know?”.  If you’re feeling blue, don’t even attempt to battle the change of heart a little Burl Ives’ “Holly Jolly Christmas” will cause within.  Feel the love flood over you as Bing Crosby sings “White Christmas“.  Taste the frisky as Natalie Cole and James Taylor purr “Baby, It’s Cold Outside”.   And  I dare you to withstand the weight of melancholy one second longer after listening to Chris Tomlin rock “Joy To The World“.

What are some of your favorites?     (Keep reading… contest details coming up…)

Below are some of mine.  For me, Christmas just isn’t Christmas without these in the rotation.  They’re all available on iTunes but just in case you’d like the physical CD or vinyl version, I’ve made it easy for you; all you have to do is click on the album cover image.

All that’s ever required for me to truly exhale is a little sweet baby James.  How it took so long for this hero of mine to put out a Christmas CD is anyone’s guess, but a few years ago, it appeared… and it did not disappoint.  Let his version of Joni’s “River” wash over you and just say “ahhh…” . 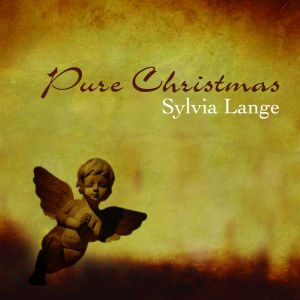 I couldn’t squander this opportunity to shamelessly plug my own Christmas album, featuring a mix of jazz, Celtic, and traditional renderings of some classics.  I must admit though, I really do love this record and hope you will order a copy right now while it’s on sale for just $8!  Don’t miss “Uncle” Hugh’s “Have Yourself A Blessed Little Christmas”, with new sacred lyrics that describe the real Reason for the season. 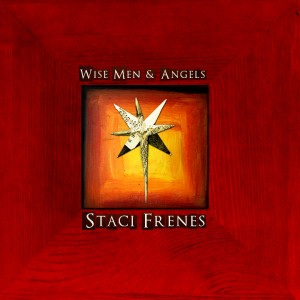 Staci Frenes is a fellow World Vision artist and an accomplished singer-songwriter with several records under her belt you won’t want to miss.  This holiday album is a favorite of mine… fresh and pure, and her song “Wise Men and Angels” will tear your heart out as you worship the Object of her affection. 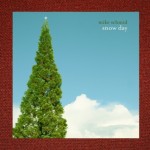 Not only is my friend Mike Schmid a poet, keyboardist, arranger, producer, and father, but he also plays keyboards and sings with the likes of Miley Cyrus and many others.  His own Christmas EP is a favorite of mine and I know you’ll agree when you hear the beauty of his writing/arranging. Pay special attention to his original “Full House” and be transported to those raucous, fun, family Christmases full of your own family’s usual suspects. 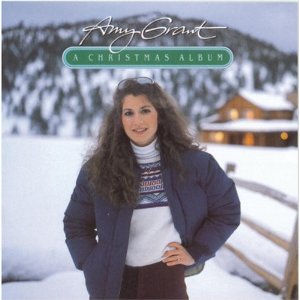 What would Christmas be without a little “tender Tennessee Christmas”?  I never tire of this record by the sweet Amy Grant.  Click the image above and be taken to a site where you can get both this classic album along with her “Christmas to Remember”. 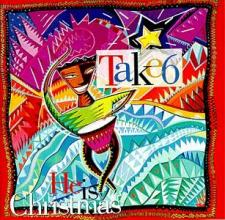 Need a lift?   A little Take 6 and you won’t be able to wipe the smile off your face. 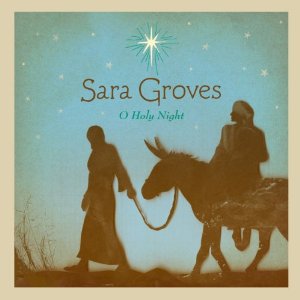 Sara Groves is, hands down,  Wolf’s and my favorite Christian artist any time of year, but her Christmas offering is our favorite.  There isn’t anything this child of God writes, sings, or subscribes to that we don’t adore. 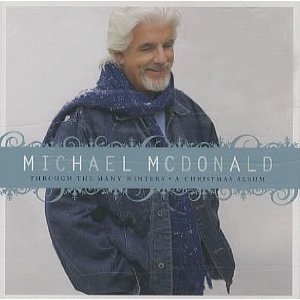 What’s not to love about Michael McDonald?  When “Through The Many Winters” first came out a few years ago it was only available in Hallmark shops but now you can get it here. Click on the album cover image to pick one up for dirt cheap, and don’t waste a minute when it arrives!

Across the street from where I grew up was a big Catholic church complete with a school, rectory and nunnery.  They hosted robust fiestas, the priests wore floor-length robes, and the nuns were nice to me.  Don’t get me started on the holy water; let’s just say for awhile that year every door in our home had a half-full Dixie cup on its threshhold and an eleven-year-old who crossed herself before going in to the toilet to pee. 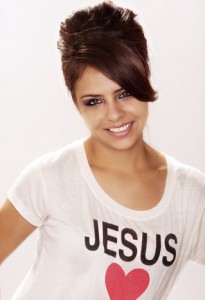 I was jealous of my friends who got to go there as I thought the place rocked. My experience with it was only from a distance though, but from my upper bedroom window looking down over the church yard I saw and heard a lot.  But what really got me was the music; Folk Mass was on Sunday nights and the songs were some of the most beautiful things I’d ever heard, igniting my budding musical sensibilities.  This was the beginning of the 70’s… a time of simple words with simple melodies sung with a simple acoustic guitar.  One stanza and chorus of one song said

Yes, they’ll know we are Christians by our love. 1

I never forgot those words.  But the real impact of them didn’t hit me until much later.

I learned that when He was here, Jesus ticked off the religious leaders of the day when He said the commandment that trumped all others was that we should love God with everything we are and next, that we should love our neighbor like we love ourselves2.  Who wouldn’t agree with that?  But although I called myself a “Christian” for a long time, for years I didn’t live up to what that moniker means, in fact, sometimes not even close.  I didn’t love — I lied.  I judged. I compromised. I put myself first and tried to get away with all degrees of ugly.  But I sure looked good when I needed to.

Oh maaaaan, it seems to be there’s a lot of that going around especially on the public stage. Is it just me, or lately does there seem to be a rash of Christians in the news who seem to be tarnishing the label beyond repair?  As I listen to some of Christianity’s more vocal public critics like Bill Maher, Joy Behar and Jimmy Fallon bashing so much of what I hold dear, I want to shout at the TV  “that’s not Jesus!”  And although I cringe at their vitriol, I have to admit something to you:  I kinda don’t blame them.  I mean, come on.  If all they see “Christianity” to be is a TV pastor who once publicly decried homosexuality but then was caught in the back room with a male companion, or believers picketing a California state proposition in anger, or the singer who sang songs about Jesus but then stole another woman’s husband, or a Christian politician’s family member who (whoopsiedaisy) had a child outside of marriage… what are they SUPPOSED to think it’s all about?

Lest I scare some of you, I hope you’ll hear this: I believe we need to stand up for what we believe and strongly defend our faith.  I do. But when we do, do we sometimes forget people are watching as we claim to represent God Almighty?  Are we only ambassadors of His judgment… but not His mercy and love?  What would it look like in today’s political and moral climate if we “put on love”3 in the way He did?

Here’s how I see it.  I can’t speak for how you’ve “lived love” in your life, but I can sure say I’ve done some of those despicable things they’ve done when I knew better.  Many of the hurtful, selfish, idiotic, judgmental things I’ve said or done would cause anyone to question whether I was in fact a real Christian, or certainly whether or not I knew how to love.  As a result, I know I’ve caused a whole lot of people confusion and pain.  Worse, I have very likely done serious spiritual damage in some who might’ve looked to me for what a Christian should be like.  That’s just the awful truth and although I know God’s forgiven me, I have to live with that.

But here’s the sweet part of the deal: today I know God is the “God of the second chance”.  He forgives, He remembers no more, and He moves on, wanting us to do the same so that we don’t waste one more second of the limited time we have on earth wallowing in yesterday’s news.  That’s the beauty of being His kid!  I will always be a bonehead who blows it but hopefully, those “I knew better” moments will be fewer and farther in between and man-oh-man am I grateful He wipes the slate clean each time I recognize it, tell Him so, receive His forgiveness and MOVE ON.  Hopefully I am learning each day to be less concerned with being the perfect Christian and more concerned about what it means to love Him (action) with all that I am and to love others around me (action) as God asked me to do, whether or not they believe the same way I do.  The rest will take care of itself, I know it.  I am convinced today that I am a member of a royal line who is forgiven, loved, and thought the best of by the King.  I want to live like I believe that and will keep on trying to love the way Christ would want me to, all the way until He greets me at the door of heaven.

How will they know we are Christians?  I’d like to think it’s more than what’s emblazoned on our T-shirt, but rather, by the unmistakable way we love.

Read Sylvia’s other posts, and LIKE her on Facebook!
1 ©1966 F.E.L.Church Pub., Ltd. Assigned 1991 to Lorenz Publishing Company, a division of The Lorenz Corporation. Reprinted with permission (8/30/12).